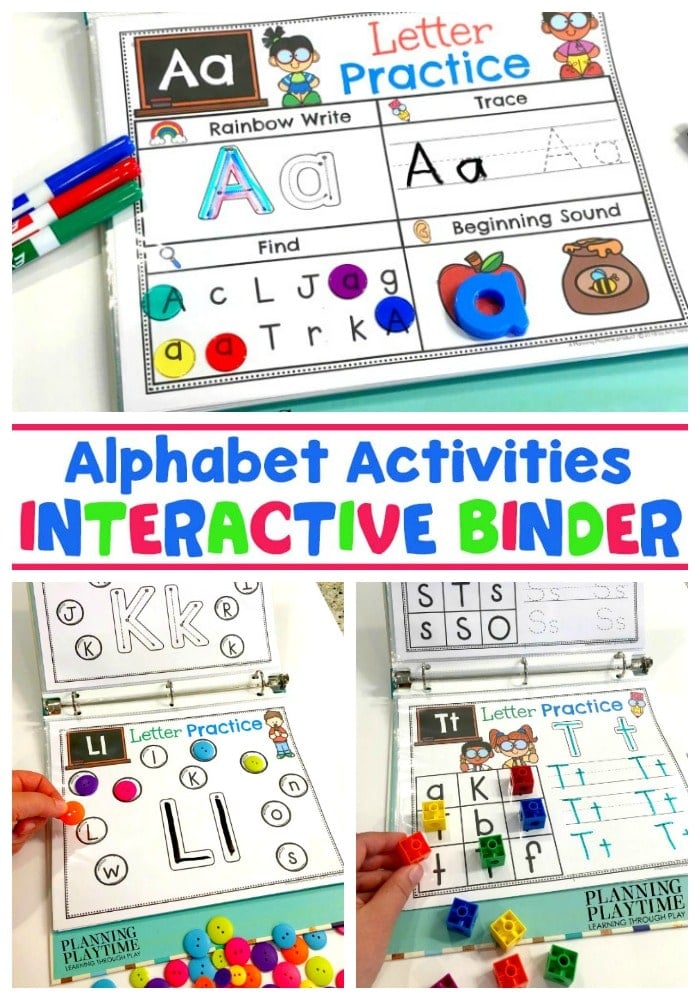 Looking fun Alphabet Printables and Activities for preschool and kindergarten? This Alphabet Activities Interactive Binder is easy to prep, easy to store, and LOADS of fun.

Pull this binder out for literacy centers, morning work, or early finishers.

Use it in the classroom, at home, or even in the car.

The alphabet printables work with simply a dry erase marker or add playdough, buttons, cubes, etc. to make it more hands-on and fun.

Our favorite way to use these Alphabet Printables is in a binder.

I print them and do 2 pages to a sheet protector, one front and one back. You could laminate a front and back toether as well if you prefer, and punch them with a 3-hole punch.

Once the pages are in the binder, you’re ready to start the activities. 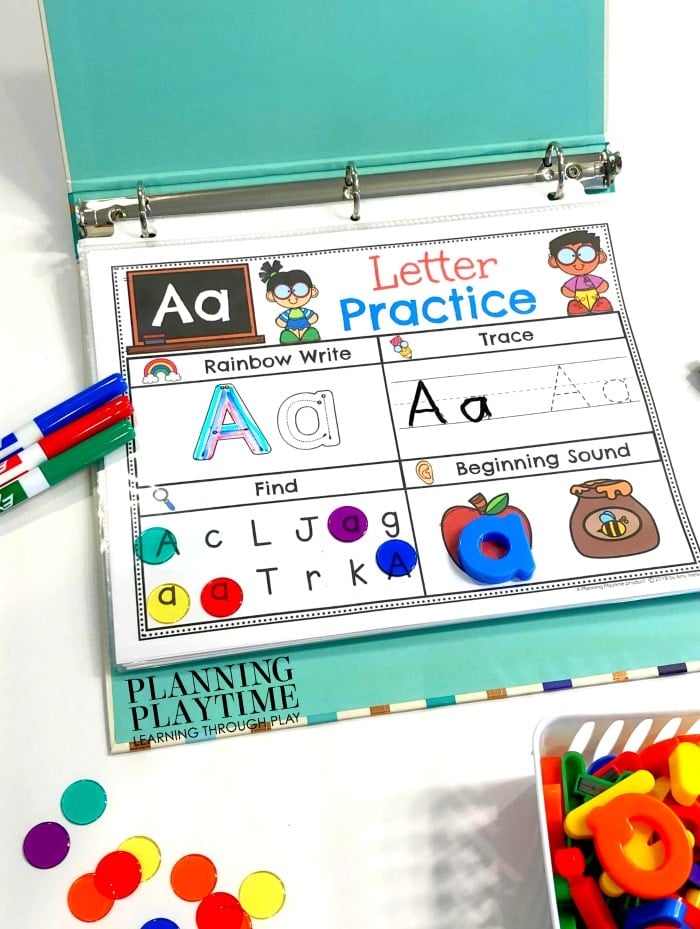 Kids can color or Rainbow Write the letter in both upper and lowercase.

Next, they have a chance to trace the letters.

Then, we’re on to the Find section. We use the clear plastic disks for this because the kids can still see through to the letters and they are colorful and fun.

Buttons would work well here as well as playdough, flat marbles, or whatever else you would like to use.

Finally, kids get to mark the picture that has this alphabet letter’s beginning sound. Do it with a marker or scoop and place a plastic letter right over the top of the picture. 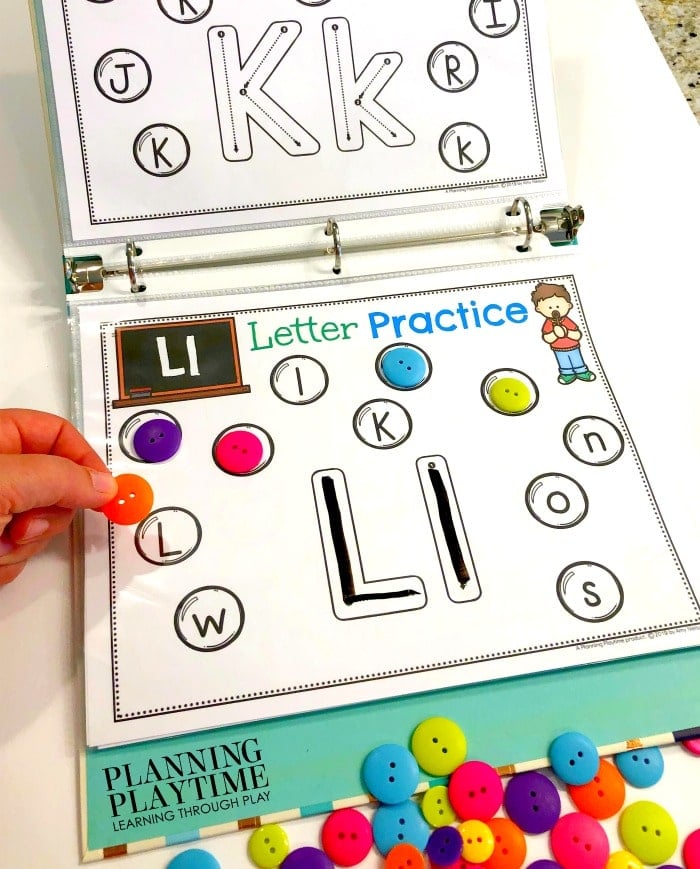 Use these fun alphabet printables a couple of different ways.

The central buble letters are made to be traced. However, they are also perfect for shaping playdough letters.

Roll a strip of playdough and use it to make each letter.

The bubbles surrounding those central letters can be covered with buttons, clear plastic disks, flat marbles, or even playdough balls.

If you cover them with playdough balls, let the kids have a chance to “Pop” the letters as they go. 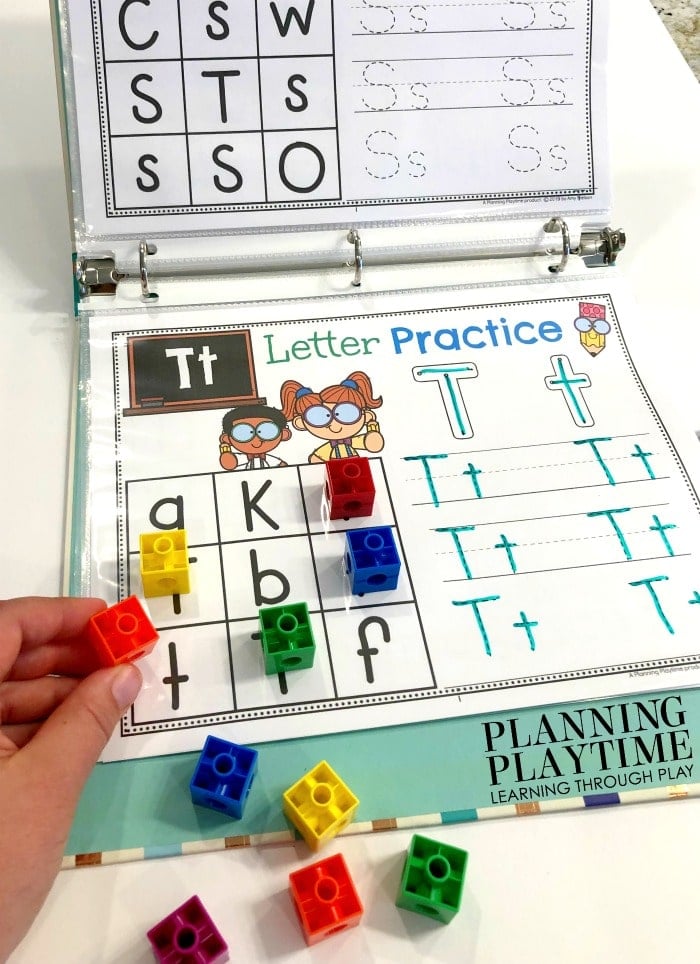 Would you like to know the best thing about these alphabet printables?

They are SO easy to switch up for various seasons and themes.

For example, in this picture we used snap cubes to cover the matching letter find. However, if we were doing a dinosaur theme, I would let the kids cover up the letters with dinosaurs.

Christmas? Cover them with mini gift boxes or gingerbread crackers.

Goldfish could be fun. Candy hearts on Valentines day…

The options are endless.