Candy hearts are filling the store shelves, and it is time for a Valentine’s Day math activity for kids. This activity is all all about adding and comparing numbers. It’s colorful, interactive, and fun, and the kids will love it.

For this activity we are turning candy hearts into greater than or less than symbols. The shape works beautifully, and what kid doesn’t like to play with candy hearts? You don’t need dominoes for this math activity, but it allowed us to do a bit of addition as well.

Give your children a stack of dominoes and a bag of candy hearts. Have them create two lines with the dominoes, with a bit of space in between.

Next, count the number of dots on each side of the domino. Add them together. When you’ve done this for the two dominoes across from each other, compare the numbers. Use the candy hearts to show which one is greater than and which one is less than.

This activity is great for kindergarten and first grade. My second grader heartily enjoyed it as well. It covers counting, addition, and comparing numbers all in one delicious, colorful activity. You find that it covers several common core requirements as well.

If you don’t want to use dominoes, dice would be a great alternate. The children could roll 2 or 3 dice, add them together, and then do it again for the other side. This could cover 3 addend addition practice for those first graders. 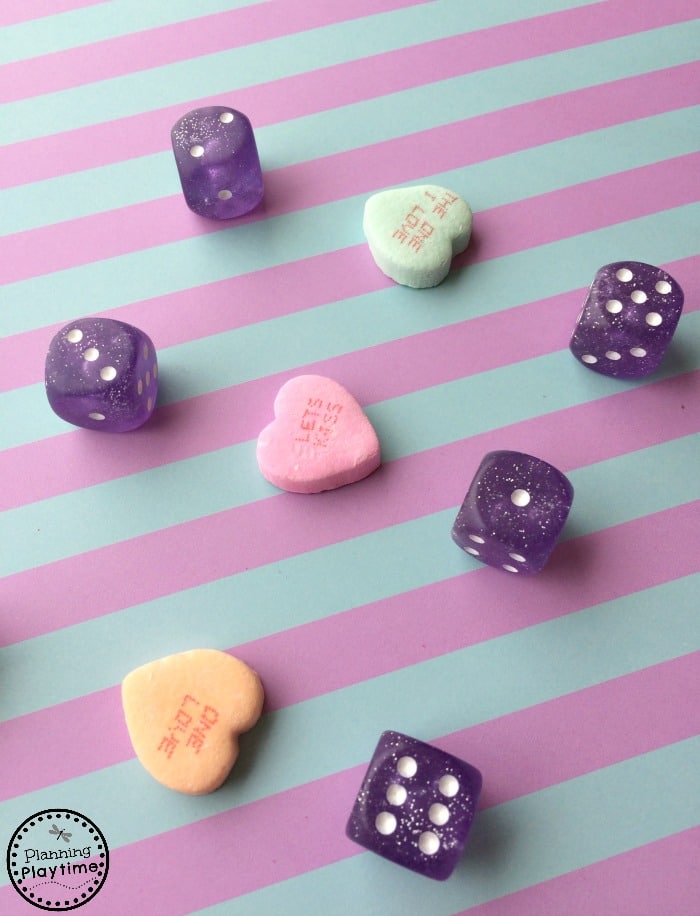 Thank you for checking out our Valentine’s Day Math Activity for kids. Have fun comparing numbers, and eating candy hearts. 😉

We use cookies on our website to give you the most relevant experience by remembering your preferences and repeat visits. By clicking “Accept All”, you consent to the use of ALL the cookies. However, you may visit "Cookie Settings" to provide a controlled consent.View Terms and Conditions
Cookie SettingsAccept All
Manage consent

This website uses cookies to improve your experience while you navigate through the website. Out of these, the cookies that are categorized as necessary are stored on your browser as they are essential for the working of basic functionalities of the website. We also use third-party cookies that help us analyze and understand how you use this website. These cookies will be stored in your browser only with your consent. You also have the option to opt-out of these cookies. But opting out of some of these cookies may affect your browsing experience.
Necessary Always Enabled
Necessary cookies are absolutely essential for the website to function properly. These cookies ensure basic functionalities and security features of the website, anonymously.
Functional
Functional cookies help to perform certain functionalities like sharing the content of the website on social media platforms, collect feedbacks, and other third-party features.
Performance
Performance cookies are used to understand and analyze the key performance indexes of the website which helps in delivering a better user experience for the visitors.
Analytics
Analytical cookies are used to understand how visitors interact with the website. These cookies help provide information on metrics the number of visitors, bounce rate, traffic source, etc.
Advertisement
Advertisement cookies are used to provide visitors with relevant ads and marketing campaigns. These cookies track visitors across websites and collect information to provide customized ads.
Others
Other uncategorized cookies are those that are being analyzed and have not been classified into a category as yet.
SAVE & ACCEPT